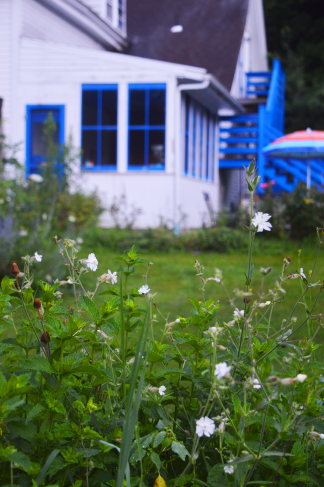 Named one of Electric Literature’s “8 best writing retreats that won’t break the bank,” Wellspring House was founded in 1999, by Ann Hutt Browning and her husband Preston Browning, Jr. Together, they had a vision to develop not just a space and lodging site for writers and artists, but also a place imbued with the serene interrelation between our human environment and the natural one.

For almost two decades, the house has been home to over a thousand writers and artists who have journeyed from various parts of America and abroad in order to find solitude and their artistic refuge at Wellspring.

And the rest is,
as they say, history…

In the summer of 1998, Ann and Preston came to Ashfield, MA to spend time with their second daughter, Sarah, who had just given birth to their first grandchild. They began looking for property in the area in order to stay close, but they had a hard time finding a house that felt ‘right’ for them.

During her search, however, Ann Hutt Browning came across an old carriage house, built in the 1880s which was not in great shape. She returned to her then-home in Chicago and asked Preston whether they might buy the property, renovate it, and turn it into a retreat for writers and artists. Preston was on the fence initially, but his daughter, Sarah, urged him on with the familiar line, “if you build it, they will come”. That Thanksgiving, Preston and Ann returned to Ashfield, MA and bought the house.

Ann had a vision. She spent her early mornings in the early winter of 1999, drafting renovation plans. They hired a contractor, and by August 1999, opened the doors of Wellspring to the public. They welcomed their first resident on Sept. 3, 1999.

Since then, Ann and Preston have welcomed writers, artists, playwrights, poets, and creatives of all types to the serene and idyllic site that is the Wellspring home. Though Ann passed away in 2011, Preston has carried on the vision that she first inspired.

For each year, Wellspring house has hosted a special Poetry Reading Series which invites a writer to Ashfield, MA, for a special reading event. Recent writers have included: Ocean Vuong. During these events, residents in the house are invited to special in-house readings. Occasionally, Wellspring hosts a number of other literary events for the public.

In 2017, Preston began the Resident Writers Fellowship, allowing for a writer to live on site as a long-term resident and to help manage the property and scheduling. In 2019, John Howard, and his partner, Aubrey Crosby, joined the Wellspring family as writers-in-residence. They followed from Jonathan Escofery and Colwill Brown, who served as Resident Assistants prior.

Covid-19 and the Closure of Wellspring

In 2020, Wellspring House Retreat, like many businesses, temporarily closed its doors to help prevent the spread of Covid-19. The evolution of Covid-19 and its impact on Wellspring and its director, Preston Browning, served as an impetus for the difficult decision to close our doors after 22 years. To read more about this closure, view our Closure Statement here.

Poems from the Wellspring Anthology

In celebration of Preston’s 90th birthday, and Wellspring’s 20 Year Anniversary, co-editors Arlyn Miller and Wendy DeGroat published an anthology in 2019 called, Poems from the Wellspring—a “love story” of poetry written by 43 poets reflecting on and commemorating their time at Wellspring.  To order your copy of this seminal anthology, please visit here.

“The quiet has nothing to do with the number of guests, the season, a sun-filled morning or a blizzard raging outside. It is not a lonely, empty quiet, but the product of lushness, of fullness, and warmth.”

“A clean and comfortable house in a gorgeous setting.”

“There’s really a magical element, a creative energy, to that house.” I found being there was so productive—I couldn’t have written my book without it.”

“I can’t tell you how many writers I know just in Boston who would love to stay here. It’s a space where you can really feel this sustained attention to writing. But it’s still something of a best-kept secret.”

One of “the 8 best writing retreats that won’t break the bank.”